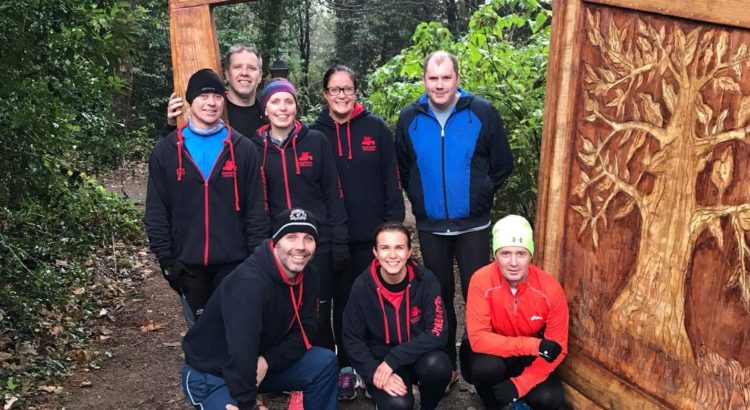 Richard Craig made up for the lack of PBs at Carrickfergus on 5th November by taking 1st place, there is that at least.

Alison Welsh, Glenda Murray (with a course PB of 31:53) and Carol Downey (1st run on this course) went to Craigavon with Geraldine Kane (1st run at Craigavon) who has now completed 21 of the 23 (so far) NI parkruns this year.

Derek Kane retuned to Larne to help Michael Kane finish his 22/23 (soon to be 24) challenge.  It was Michael’s 1st run at Larne.

And Ronald Simms returned to familiar ground by going to Wallace.

Elsewhere Ian Cleland was 1st on his 1st appearance at Falls, Alan Poag turned his 22 challenge into 23 by attending Omagh for the first time, Colin McCrum went back to Queens while Brendan Rice and Ann McCracken both ran at Victoria.

Seapark took over the volunteering duties at Carrickfergus parkrun on 12th with every position being filled by a Seaparker.

Susan Kane & Geraldine Kane both attended their 1st run each at Bangor.

Bobbie Irvine, Allan Grant, Nicola Irvine and Derek Kane all went to Omagh for the 1st time each, turning their 22 parkrun challenges into 23.

Elsewhere Richard Craig attended his 1st run at Ormeau, while at Queens there was Ian Cleland (1st run at Queens) & Sarah Johnston (with a parkrun PB of 24:29).

The 19th was the date that the Team Blue/Pink ‘original’ 22 parkrun challenge came to an end with Robert Murray attending his 2nd run at Derry for the boys (to run on behalf of Mark Welsh who pulled out of the challenge earlier in the year).

While the girls finished in Armagh.  Michael Kane (with a course PB of 31:51) accompanied both Julie Kelly and Geraldine Kane who where finishing the original 22 challenge.  It was the first time at Armagh for both girls.

This was also the week of the Valley mannequin challenge.  If you haven’t seen the video yet then stop what you’re doing and watch it now.

Ian Cleland was the first Seaparker home and he was followed by Richard Hetherington, Bobbie Irvine, Philip Poag (with a course PB of 25:55), Karen Poag and Karen McMaster.

While that was going on Gary Craig achieved a course PB of 25:02 at Queens, Philip Poag and Karen Poag (with a course PB of 27:04) returned to Valley, Ann McCracken went to Victoria and Karen McMaster attended her 1st run at Newcastle (Upon Tyne).

Everyone has now finished the original 22 NI parkruns.  Though a few still have to finish Omagh (the 23) and Rostrevor (the 24).

The two charities are Brainwaves NI and Macmillian Cancer Support. Remember that if each of the two charities reaches the £2500 target then Michael Kane and Trevor Lamb will get their legs waxed and then run a 10K with nice waxed legs. You know that the suffering of others will make you feel better so dig deep.