June was a buy month for Seaparkers at parkrun.

Ian Clelland, running very consistently at present,  secured 1st male at Carrickfergus on two consecutive weeks 20th & 26th, Ian Hunter took 3rd male on his June parkrun at Carrickfergus in a PB time of 19:36. The Carrickfergus team welcomed Charlie McCormick back after his injury earlier in the year. Charlie put in a strong comeback performance on 27th June. Warren Cosgrove continued to improve on his parkrun time and bagged himself 29:33 on 27th June. After a long spell in the desert Bobbie Irvine decided to run at home in June, completing 3 runs at Carrickfergus. Other members attending Carrickfergus parkrun in June included Mark Welsh, Lynda Shannon, Gareth Hamill, Phil Poag and Tony Barclay. 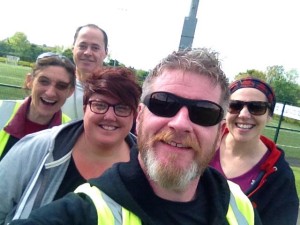 Lots of travelling going on as well in June to Portrush. – Ian Cleland on 13th June who took 4th place at Portrush. Gillian Barnhill dropped in to Carigavon on her way to a much longer run on that day (28th) and managed to secure 3rd lady! Robert Murray completed all 4 parkruns in June, one in Carrickfergus and the others at Antrim, Queen’s and Victoria. Colin McCrumm also completed all 4 parkruns in June with two away runs at Queen’s and Victoria. Karen McMaster chalked up her 50th parkrun in June and completed all 4 parkruns at 4 different locations! – Antrim, Carrickfergus, Queen’s and Waterworks. All that travelling Karen 🙂 Ruth Hawkins joined the tourist trail and managed her fastest parkrun time yet (24:55) in Antrim and Sara Johnston got her best time away from home as well with 28:47 at Portrush. Trevor Lamb – we missed you! – you did both your June runs at Ormeau. Finally Gavin Irvine completed his June run at Kirkcaldy and The Rice family went on a wee parkrun trip to Queen’s.