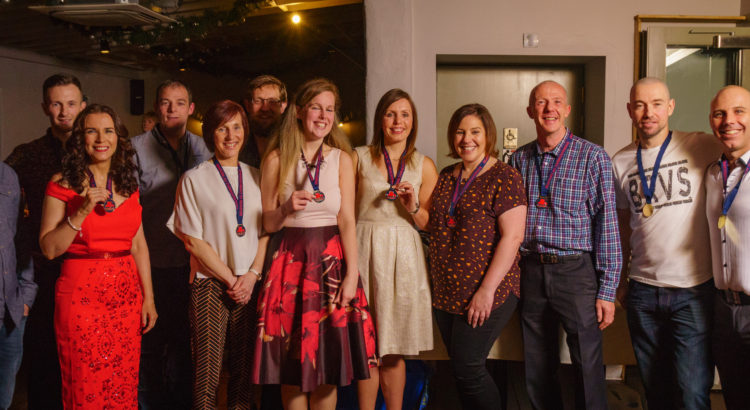 OIt has been a very successful year for Seapark AC with the club growing to almost 150 members and several members achieving podium places and in some cases winning running events.  With the increased number of members the club handicap races have taken on a bigger meaning this year with a lot of rivalry going on throughout the year.  This made this year’s prize giving night the biggest since the club was formed 10 years ago in 1996 with almost 100 friends and family attending the event on 26th November.

The club did their traditional 5K, 2.75 mile forest race, 5 mile & 10K races plus this year a 10 mile road race was introduced.  In a lot of cases the runners excelled beyond their own and the coach’s expectations to make the very interesting handicap series.

First up for the series was the 5K race with all of the first 3 over all the line being female.

3rd place went to Jessica Lyness, 2nd to Becki Tester and the winner of the race was Nicola Dunlop.

Next up was the 2.75 mile Forest Race.  This is a lot of members favourite and due to the increased numbers a new course was designed by Bobbie Irvine around Woodburn Reservoir.  3rd over the line was Beth McCormick, 2nd for the first of his podium finishes was Colin McCrum and 1st was Patrick Hughes.

The third race of the series was the much loved 5 miler.  Ronald Simms crossed the line in 3rd Place, Colin McCrum took his second 2nd place and 1st over the line was Charlie McCormick.

The fourth race in the series was the newly introduced 10 mile road race designed by new Head Coach Karen Poag.  Runners excelled in this race with a lot of members not having covered this distance before.  3rd over the line for this race was Catherine Steele, 2nd place went to Ian Cleland and Ronald Simms crossed the finish line in 1st place for the second of his podium finishes.

The fifth and final race in the series returned to one of our traditional events in the form of a 10K.  In 3rd place was Marie Nicholson, 2nd place went to Aimee Weatherhead and 1st place went to Rory Poag.

Every member who completed all 5 events had the opportunity of taking home the Overall Handicap Series trophy and Plaque.  It took great commitment to complete all the events throughout the year, so well done to those who completed all five events.

The 3rd placed Male runner was Jonathan Beattie, 2nd Male was Ronald Simms and the male winner was Richard Craig.  Richard not only won the series, but set new records for 4 of the 5 races in the male category.

In the female category, Heather Haggan finished in 3rd place, Caroline Saulters finished in 2nd place and the winner was Elisoa Crawford.  Elisoa set the female course record for all 5 events.

To reflect the growth of parkrun in Northern Ireland Andy Smyth created a Challenge whereby members had to complete 3 parkruns and volunteer at the local parkrun in Carrickfergus.  Ian Cleland and Sara Johnston won the 25-29 category, Simon Trimble won the 30-34 category, Jonathan Beattie and Alison Welsh won the 35-39 category, Trevor Lamb and Gillian Strudwick won the 40-44 category, Charlie McCormick and Karen Waring won the 45-49 category and last but not least Bobbie Irvine won the 50+ category.

Well done to all those who completed this increasingly popular challenge.

The Seapark AC Performence of the year Award went to Bobbie Irvine for all the laughing (and a bit of running) he did this year.

And the Seapark AC Runners’ Runner of 2016 Award (as voted for by members) went to #STC10K cover girl Karen Poag.