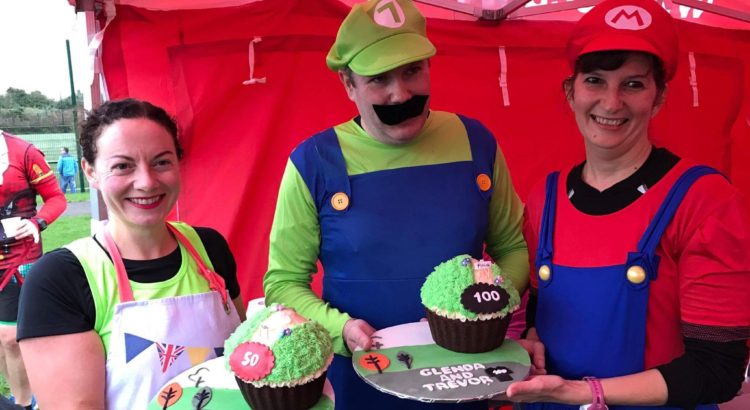 No first place finishers for Searpark at Carrickfergus this week.  Jonathan Beattie was the first Seaparker to finish in a pitiful 6 position.  He was followed by Bobbie Irvine, Laura Johnston (with her 1st ever parkrun), Nicola Irvine (course PB of 25:42), Jessica Lyness (parkrun PB of 26:10), Julie Lyness (parkrun PB of 26:31), Catherine Steele, Gary Craig & Julie-Ann Mitchell.

Richard Craig attended his 1st run at Antrim (with 2nd place) while Rebecca Tester achieved a course PB of 29:05.

At least someone got a 1st place finish this week.  Robert Murray took 1st place at Stormont while equalling his parkrun PB of 19:43.  Nikita Murray & Glenda Murray also attended.

Elsewhere there was Richard Hetherington at Limavady, Julie Kelly on her 1st run at Ormeau, Karen McMaster + Clive Weatherhead (1st time) at Valley & Gillian Strudwick (with a parkrun PB of 23:02) at Victoria.

It was back to a Seaparker finishing in first place at Carrickfergus on 8th with Ian Cleland taking the podium spot.  Following him where Charlie McCormick, William Jenkins, Robert Murray (with a course PB of 19:56), Jonathan Beattie, Bobbie Irvine, Rory Poag (parkrun PB of 24:58), Nikita Murray (1st run at Carrickfergus and finishing her 22 challenge), Julie-Ann Mitchell, Glenda Murray & Toma Gerasimaite.

Further afield Philip Poag & Karen Poag both participated in their 1st run each at Marlay.

The Race to 100 had its first finisher this week with Karen McMaster at Carrickfergus (yea!)

Richard Craig was first over the line at Carrickfergus on 15th October.  He was followed by William Jenkins, Bobbie Irvine, Allan Grant, Laura Johsnston (2nd parkrun with a PB of 24:53), Colin McCrum, Jessica Lyness (10th parkrun and everyone a PB, 25:53 this week), Catherine Steele, Simon Trimble, Karen McMaster (on her 100th parkrun) & Julie-Ann Mitchell.

Charlie McCormick and Susan Kane both ran their 1st run each at Larne.

The 22 challenge became 23 with Seapark attending week 2 of the new Omagh course for the first time.

Richard Craig took the podium spot at Carrickfergus on 22nd October with a course PB of 17:56.  He was followed by William Jenkins, Jonathon Bell, Bobbie Irvine, Charlie McCormick, Laura Johnston, Nicola Irvine (with a course PB of 25:30), Alison Welsh (with a parkrun PB of 26:21 on her 50th parkrun), Catherine Steele, Karen Poag, Derek Kane, Trevor Lamb, Chloe Anderson, Neill Harper (and Oska) & Elise Park (with a course PB of 35:52).

Julie Kelly attended her 1st run at Antrim with a parkrun PB of 26:42.

Ronald Simms was the 1st finisher on his 1st appearance at Colin Glen.

Rebecca Tester turned her 22 parkrun challenge into 23 by attending Omagh for the 1st time.

The third Seaparker of the week to obtain a 1st place finish was Ian Cleland at Stormont (with a course PB of 19:05).

Elsewhere Robert Steele did his 1st run at Portrush.  Queens was attended by Gillian Strudwick (1st run at Queens with a parkrun PB of 22:48), Andrew Smyth (1st run at Queens) & Gary Craig.  Gillian Bell achieved a course PB of 33:07 at Valley, while Allan Grant did the same (course PB of 24:14) at Waterworks.

Carrickfergus parkrun on the 29th October was the event everyone had been waiting for all year, but that was most likely due to the fact they knew there would be cake.  That said, it was the 100th parkrun each for both Glenda Murray and Trevor Lamb + it was the big five-o for Karen Poag (again I mean parkruns, not age).  Both Glenda and Trevor took a wee dander around the three lap course to make everyone wait for the cake.

The Pink Flamingo aka Ian Cleland was 1st over the line and was followed by William Jenkins (with a parkrun PB of 19:31 – He must really wanted to catch that flamingo), Mark Welsh, Charlie McCormick, Paul Daniels (with a parkrun PB of 21:45), Bobbie Irvine, Jonathon Bell, Allan Grant, The Red Queen aka Sara Johnston (with a course PB of 25:10), Laura Johnson, one of the Witches of Shaftesbury Park aka Gillian Strudwick, Catherine Steele, Claire Hamilton (with a parkrun PB of 26:59), Nikita Murray (with a course PB of 27:33), a mindless zombie aka Robert Murray, Derek Kane, the Human Baker aka Karen Poag (on her 50th parkrun), Rory Poag, the only S Club 7 fan left aka Philip Poag, Karen McIlroy (with a parkrun PB of 28:29), Simon Trimble, Alison Welsh, the second Witch of Shaftesbury Park (but is she the good Witch of the North or the evil Witch of the East?) aka Julie-Ann Mitchell, Susan Kane (with a course PB of 29:33), Kara Zor-El aka Kara Danvers aka Supergirl aka Rebecca Tester, Karen Bell, Richard Hetherington, the Dread Pirate Roberts aka Oska with Neill Harper, a zombie cheerleader aka Karen McMaster, Nicola Dunlop, Thomas Dunlop, Gillian Bell, Mario aka Murrio aka Glenda Murray (on her 100th parkrun), Luigi aka Lamigi aka Trevor Lamb (on his 100th parkrun) and Darth Vader aka Karen Waring.

Colin McCrum and Nicola Irvine missed out on the cake by going to Stormont.

Richard Craig got a parkrun PB of 17:22 on his 1st run at Victoria while Gary Craig and Brendan Rice also attended.

Elsewhere Ronald Simms went to Falls for the first time while Ann McCracken returned to Ormeau.

Team Blue for the boys and Team Pink for the girls.

The two charities are Brainwaves NI and Macmillian Cancer Support.  Remember that if each of the two charities reaches the £2500 target then Michael Kane and Trevor Lamb will get their legs waxed and then run with nice waxed legs.  You know that the suffering of others will make you feel better so dig deep.

It’s now complete.  Between 26/03/16-29/10/16 participants had 32 weeks to complete three different parkruns, plus volunteer at Carrickfergus (and wear a hi viz vest) at least once.  The parkruns included Carrickfergus, Larne and the third one was any of the participants own choosing.  Age grade percentage will decide the winner.  Results to be confirmed.