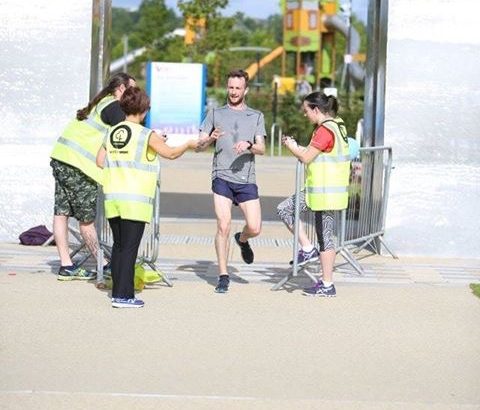 It was another busy month with Seapark eating cake all over the place.

While Allan Grant attended his 1st run at Enniskillen.

Valley had its 100th run and their 2nd anniversary cakerun on 6th Aug.  Everyone in attendance said they knew nothing about the cake.  I believe that.  Richard Craig was the 1st one across the new finish line.  He was followed by Charlie McCormick, William Jenkins (with a course PB of 20:26), Philip Poag, Karen Poag (with a course PB of 27:46), Trevor Lamb and Michael Kane (1st run at Valley).

The three amigos went to Waterstown the weekend of the Dublin Rock n Roll half.  Gavin Irvine, Bobbie Irvine and Neill Harper all attended Waterstown for the first time each.

William Jenkins was the 1st Seaparker home at Carrickfergus on 13th.  He was followed by Ian Cleland, Brendan Rice, Jennifer Jackson, Emily Smiley (with a parkrun PB of 25:32) & Julie-Ann Mitchell.

Rebecca Tester achieved a course PB of 29:10 at Stormont.

Richard Craig was the first Seaparker at Carrickfergus on 20th.  He was followed by William Jenkins, Richard Hetherington, Jonathan Beattie, Julie-Ann Michell, Karen Poag, Toma Gerasimaite (with a parkrun PB of 32:12) and Lindsay Roberts (1st parkrun ever).

Eight other parkruns where attended by Seapark this week.

Like every other week this year Seapark was represented at various parkruns around NI.

Andrew Smyth achieved a course PB of 25:44 at Larne.

Limavady had two Seapark achievements this week.  Karen Waring was 1st lady home on her first run at Limavady, while Susan Kane ran her 50th parkrun.  Derek Kane was also there, wearing his 22 parkrun winning t-shirt.

Mark Welsh and Alison Welsh both attended Portrush for the first time, the night after the Portrush 5 mile race.  Rebecca Tester attended her 1st run at Queens.  While Karen McMaster attended Valley.  And Brendan Rice achieved course PB of 19:56 at Victoria.

The last bit of cake was ate at the 1st anniversary Stormont cakerun.

Team Blue for the boys and Team Pink for the girls.

The two charities are Brainwaves NI and Macmillian Cancer Support. Remember that if each of the two charities reaches the £2500 target then Michael Kane and Trevor Lamb will get their legs waxed and then run a 10K with nice waxed legs. You know that the suffering of others will make you feel better so dig deep.

March saw the return of Andy’s parkrun challenge. Between 26/03/16-29/10/16 participants have 32 weeks to complete three different parkruns, plus volunteer at Carrickfergus (and wear a hi viz vest) at least once. The parkruns are Carrickfergus, Larne and the third one will be any of the participants own choosing. Age grade percentage will decide the winner.