s a month that just got better for Seaparkers doing parkruns both at home and as far away as Scotland.

Philippa Bell and Richard Hetherington stamped their mark on event #49 in Carrickfergus, 7th February with new PB’s, 30:03 and 20:27 respectively.

The following week there was no fewer than 5 Seaparkers who got PB’s, also at Carrickfergus. Karen Waring 29:06, Charlie McCormick 19:35 & Angela McCormick 24:28 and Phil Poag 24:32. Event #50 at Carrickfergus was also the week that Ian Cleland got his first PB of the month with a time of 19:43.

21st February, Event 51 at Carrickfergus, Ian Cleland got his second PB of the month in a time of 19:28 and new Seapark member, Stacey Wilson, completed her first parkrun.

On 28th  February Jonathan Beattie in a time of 19:56 and Jonathon Brown 22:24 clocked up PB’s as well as Carol Downey with 37:13. To finish off the month at Carrickfergus Ian Cleland made it a hat trick of PB’s with a time of 19:07 landing him in second place overall that day.

Seaparkers attending other parkruns were equally as successful.

Neill Harper and Bobbie Irvine were also out and about. Neil ran 27:20 at Craigavon on 7th February and on the same day Bobbie was overall 3rd at Portrush with a time of 22:18. 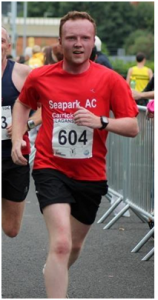 Finally to round of the month, Gavin Irvine completed his regular run at St Andrew’s in a time of 27:38 making this Gavin’s 50th parkrun and gaining him the award of his 50 T-shirt from parkrun.